Perhaps one of the most overrated, commercial days of the year is hot on our tails. It can be a nice excuse to dress up and head to your favourite restaurant but Valentine’s Day isn’t for everyone, granted.

It’s understandable why people wish to avoid going out on Valentine’s, especially when your usual haunt can be so overpriced. However, brands and marketing teams have a field day when it comes to taking advantage. It’s hard to escape the romantic occasion altogether when there are campaigns splattered across the TV, social media and even the streets! 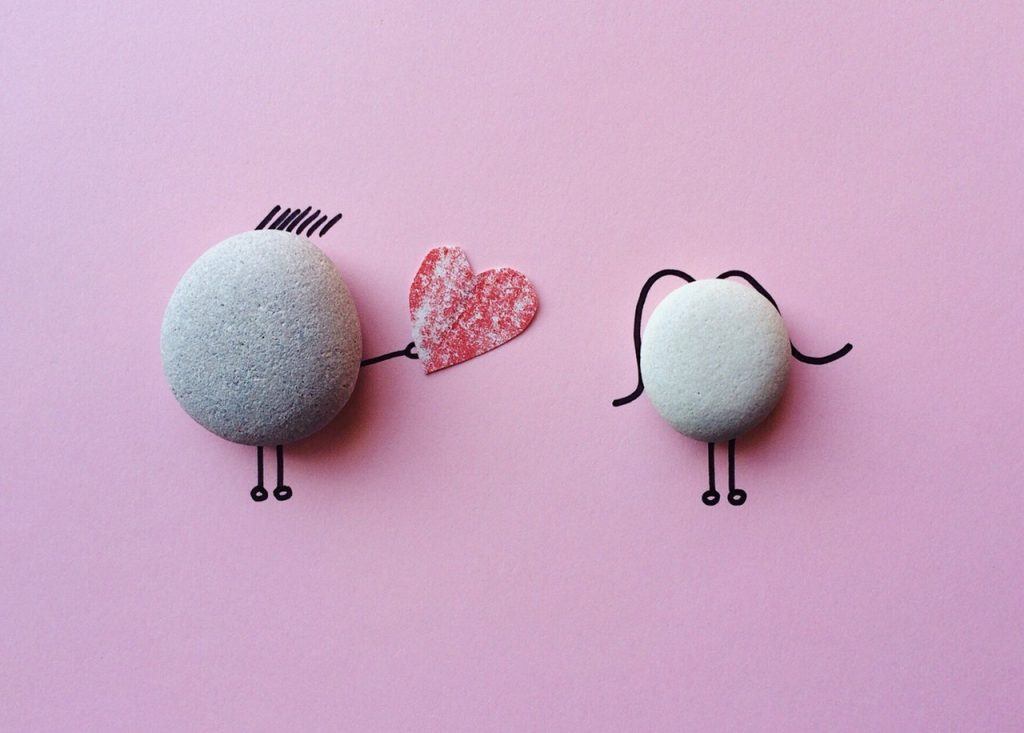 The marketing campaigns of Valentine’s Days gone by…

We thought we may as well take advantage of Feb 14th too! Here are some of our favourite Valentine’s campaigns to date, from fast food novelties to free furniture coupons. We’ve started with one from 2012 and worked right the way up to this year. Which ones do you remember? 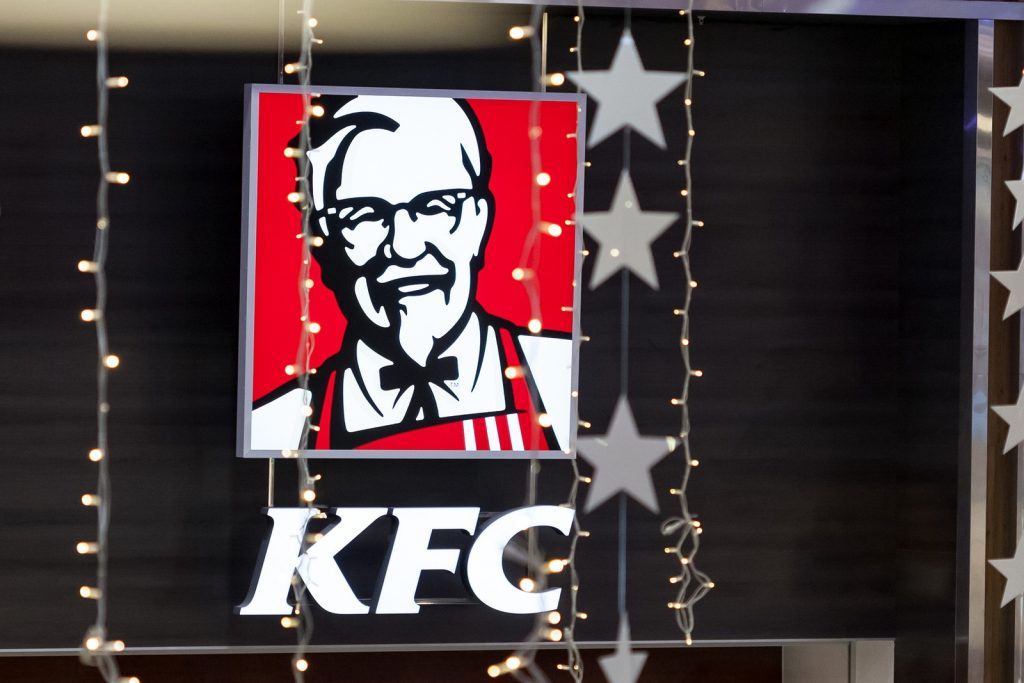 In Asia, KFC restaurants took requests for couples’ favourite songs to be played when they visited the fast-food chain. This took place during the run-up to Valentine’s Day in 2012 and customers would have to specify a time and a date for the track to be played! We like this campaign as its a low-cost, simple idea but really got people talking and quickly increased visits to the restaurants.

From February 6th in 2012, Starbucks rolled out a campaign to promote their mobile app and in-store purchases with a Valentine’s themed AR gimmick. Basically, you had to download their app, buy a coffee, take a photo of the ‘Valentine’s cup’ and you could send AR-generated fluttering hearts to a loved one. Okay, so it wasn’t exactly the simplest of campaigns but it certainly got people excited for Valentine’s Day and going to Starbucks! 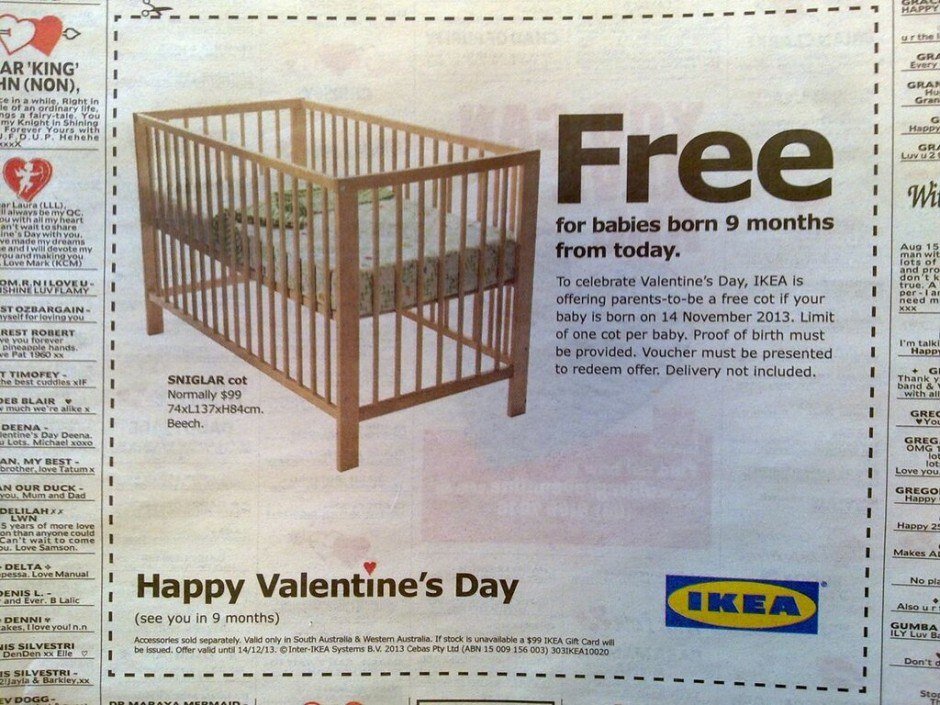 In 2013, the Australian Ikea team put together this brilliant print ad that circulated around newspapers in the country. The coupon allowed parents to claim a free cot for their baby if they were born “9 months from today”. We particularly love the “delivery not included” bit… great stuff from everyone’s favourite furniture store. 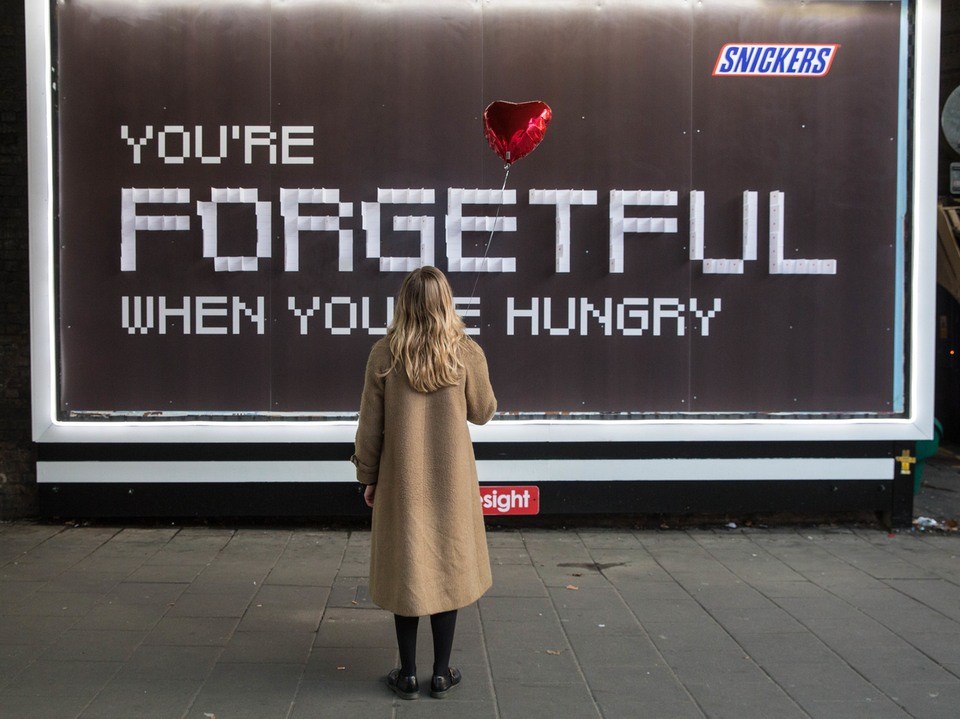 Just last year, Snickers delivered possibly one of the best Valentine’s Day campaigns we’ve seen in the UK. On February 14th 2017, billboards were seen outside London’s Waterloo Station that doubled up as free card shops. Commuters were invited to simply peel off Valentine’s cards that creatively made up the “Forgetful” part of the billboard – clever, hey?

This was one of the first marketing campaigns to pop up this year and has certainly been a hit online. The nation’s favourite pastry shop its opening its doors for couples to have a candlelit dinner on Valentine’s Day. Apparently, the menu will be crafted from Greggs’ usual products (with a twist) and will be £15 per head. It’s in selected stores only unfortunately but you can book your place here.

Take some time to ketchup with your loved one. Happy #valenHEINZ

You know we love a good pun at Limely and we couldn’t resist including this cutesy Facebook post from the classic ketchup brand, Heinz. From the little ketchup heart to the “Happy ValenHeinz” play on words, we love this one! Sometimes, simplicity works best.

What do you think?

Which ones do you think are the most unique? Which campaigns were the most effective? We’d be intrigued to know which your favourites are or if we’ve missed out any popular ones! Get in touch on Twitter or Facebook to let us know your thoughts.

Yoast SEO: Why You Should Install This WordPress Plugin