The Burger King Fiasco: Is Shock Marketing the Way to Go?

On the 8th March, the world celebrated International Women’s Day and brands across the country took the opportunity to produce themed content and show their support.

Amongst those brands was global fast-food chain, Burger King, who took to Twitter to post their own contribution to #InternationalWomensDay. But let’s just say, things went down like a lead balloon. 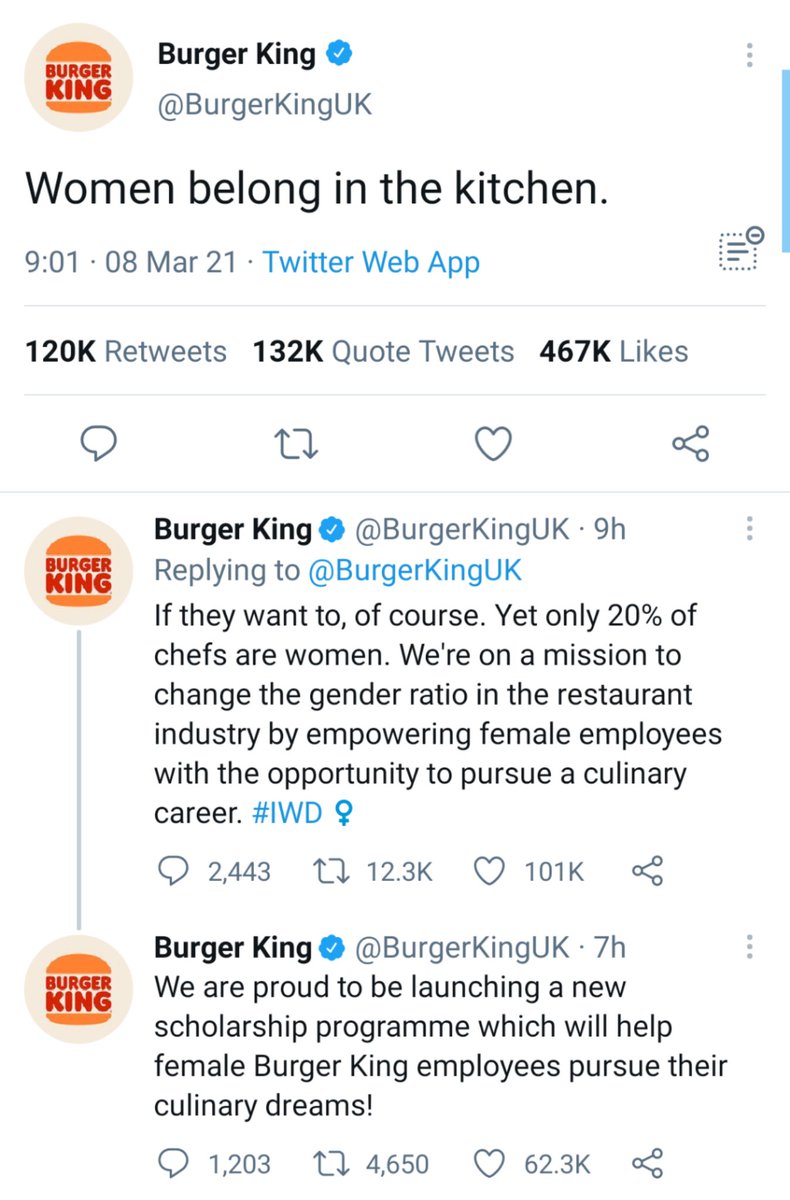 From a marketer’s perspective, what Burger King tried to achieve was an example of ‘shock marketing’. In the field, this refers to particular stunts and campaigns that are made to attract the public’s attention by creating something quite uncouth and controversial. That said, they can really pack a punch in an industry and create evergreen content that people can’t help but talk about for years to come.

But with potentially controversial content, there’s a very fine line between a successful campaign and a campaign that has the complete opposite effect and besmirches your entire brand. With the events that unfolded surrounding Burger King’s International Women’s Day Campain, it’s got us thinking: is shock marketing worth the risk?

When dealing with something so risky like shock marketing, more attention needs to be paid to its execution so you, as the brand, can do everything in your power to sway the reactions in the right direction – in a direction that means more traction and attention for your brand, featured product or cause.

In 2021, this might mean reviewing the best format for your campaign, as well as the best platform so you can make sure that it remains fully in your control and that the campaign can be seen for what it truly is – a way to get people to look past the shock factor and raise awareness for something that matters.

When this works, you’ve got a campaign that is going to get people liking, sharing, and retweeting and potentially make headlines. Take Burger King for example. Although it arguably flopped, it’s all the world can talk about at the moment, even spurring Limely to write this very article! So, as you can see, the potential of a successful shock campaign is huge.

Since writing this article, Burger King decided that it would be best if they deleted the initial tweet. However, they did leave the rest of the ‘thread’ that contained the content in which the controversial tweet was meant to highlight; the lack of female representation in culinary roles and the scholarship programme that they were launching in order to tackle it. 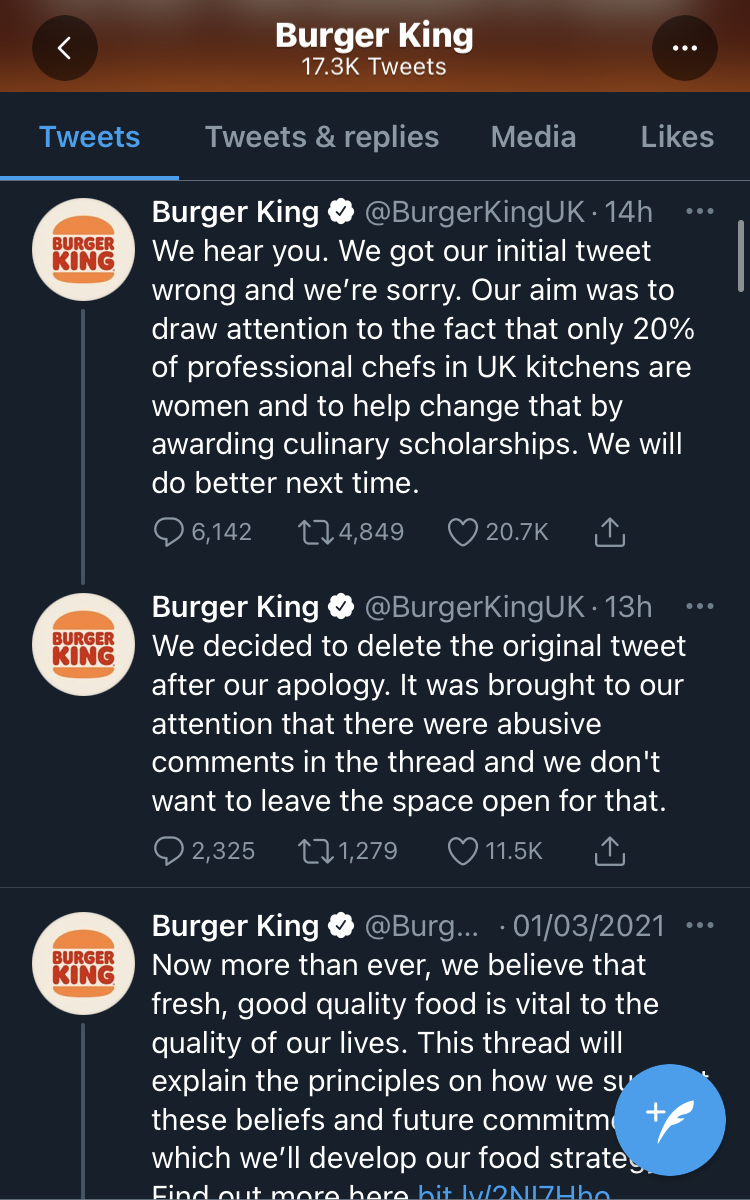 This is obviously not the result they were looking for, along with the reams of negative press that has seemed to have completely taken over Burger King’s original initiative. 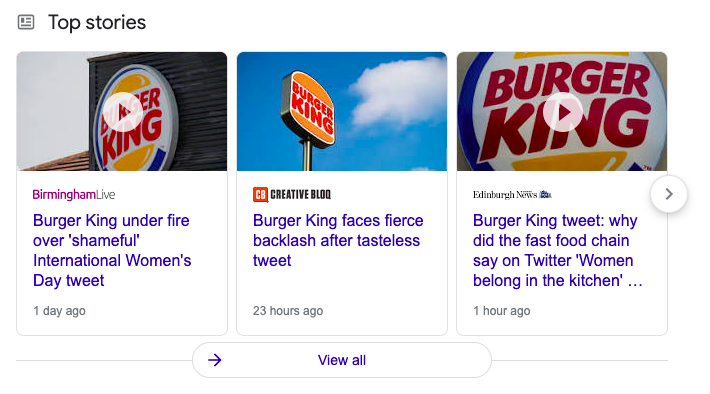 Thankfully for Burger King, they are a big enough company to come out of this alive, but the same can’t be said for other companies who may decide this is the style of marketing for them.

I don’t accept this apology. You kept defending the horrific tweet after hundreds of women told you it was incredibly inappropriate and what baffles me is that anyone thought this was a good idea in the first place, if 2020 taught us anything it’s that oppression is not a joke.

The backlash that Burger King received is a prime example of what exactly can go wrong with this form of marketing, but it doesn’t mean it can’t be effective. With a little finesse, the stir it causes could still get your brand name stuck in everyone’s head.

What’s Limely’s take on it…

We had a talk with our very own Social Media Manager Charlotte to see what her take was on it and what she thinks went wrong. She had this to say:

‘I think there was a good intention there, but the execution was all wrong. Firstly, I don’t think it was a correct decision to post something of that nature on International Women’s Day. Obviously, it wasn’t Burger King’s intention to offend, and the tweets that followed pointed towards a cause that was very fitting for the day.’

‘But what Burger King may have failed to acknowledge is that not many people read past the main headline. Plus, with Twitter’s thread layout, many of Burger King’s audience would have taken the tweet at face value. I believe if something similar was posted on a different platform, like Instagram, potentially in an infographic format, it would have been able to give that shock factor all whilst portraying the desired message. Maybe there’s just a time and a place for marketing like this, and International Women’s Day wasn’t it!’