This week it was announced that JD Wetherspoons would no longer exist in the social media world.

Ironically, the announcement was made via a tweet from the main JD Wetherspoon account. Of course, the action had immediate effect and so the tweet now exists only screenshots and memory. Take a look at the initial tweet that got the ball rolling: 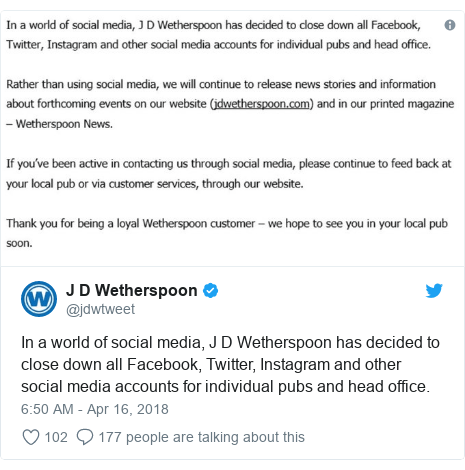 Spoons’ boss speaks to the press

Chairman Tim Martin spoke directly to the BBC, offering some insight into the decision to pull the plug on Wetherspoon’s Twitter, Facebook and Instagram accounts. He suggested that ‘people who aren’t on social media’ wish their friends weren’t. And apparently, those who are on social media struggle to get off it. When questioned by the BBC, Martin responded that he didn’t think JD Wetherspoon would suffer without a social media presence and that many other people in the company agreed. According to the chairman, 90-95% of pub managers did not feel that social was helping business.

Wetherspoons has quit twitter over worries of ‘addictive nature of social media’ to concentrate on selling cheap booze to alcoholics from 8am.

As always, there are sceptics. Some believe that this is just a major marketing ploy by the value pub chain. However, some also believe this is an escape route for a company who failed to succeed with a social strategy. It’s no secret that their accounts weren’t particularly making waves online. Regardless of the reasons behind it, this news has made us reminisce about some of best moments involving Spoons and social media. You can always count on the good people of Twitter to provide entertainment… 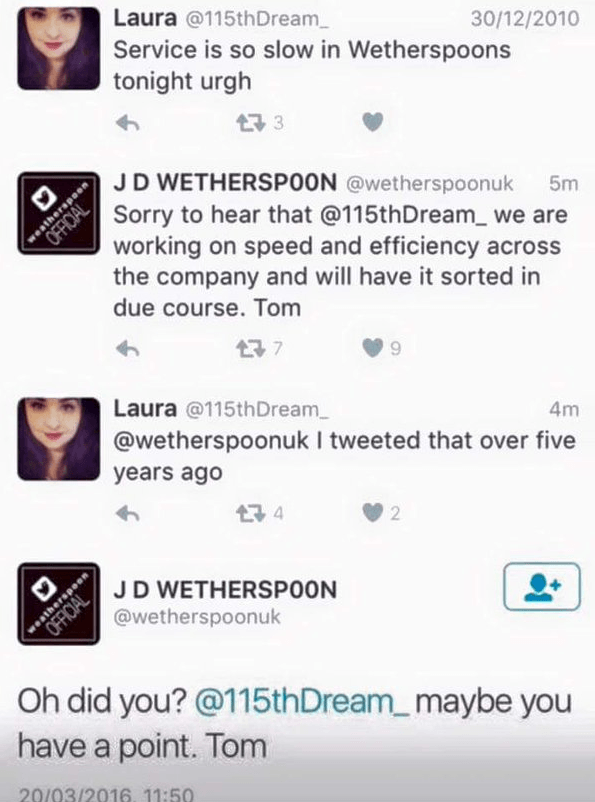 Come in and order some food, I’m pretty sure we can top that. Tom https://t.co/db2RbejjCx

There’s even a Twitter account dedicated to the colourful carpets in Wetherspoon pubs. We’re just going to leave you with that.

Why Blogging is Crucial for Your Business