Google have announced that they are binning the CAPTCHA window, and if that doesn’t make any sense to you just know that it’s a good thing.

The fight against manipulative practices on the web is in full force. Search engines like Google are forced to employ advanced risk analysis technology to separate humans from robots. Unfortunately, in order to do this, there’s a super annoying process of ‘declaring you’re not a robot’ and over the years Google has developed the way they do this with the use of machine learning.

In its infancy, CAPTCHA required you, the user, to decipher a distorted sequence of characters. This tactic was employed to prevent robots from manipulating common website functionalities. The reason being, humans can decipher distorted written text and robots weren’t sophisticated enough to do so.

Take TicketMaster, for example, the reason they make you type those distorted characters isn’t to make you feel like you’re on an episode of countdown, scrambling to buy your concert tickets before the timer is up and lose your front row seat to see Justin Bieber, no. It’s to prevent scalpers from writing a program that could buy millions of tickets at a time.

FUN FACT: By filling out the CAPTCHA box you are actually helping digitize books! Ever wondered how old books make it onto your Kindle? They use a technology called OCR (Optical Character Recognition), which takes a picture of the page and tries to figure out what each word is. Great for new books, not so much in their old age though, with faded ink and yellow coloured pages. In 2011, Luis von Ahn, one of the creators of CAPTCHA said;

For books written over 50 years ago, OCR couldn’t recognise approx. 30% of the words

To combat this, they took all of the words that OCR couldn’t recognise and essentially got us to read the words for the computer via the CAPTCHA boxes. Doesn’t feel so annoying now does it? You were part of the early stages of machine learning! To put that into perspective, 100 million words per day were being typed by users which is the equivalent of about 2.5 million books a year. And if that didn’t blow your socks off, a little over 10% of the world’s population helped digitize human knowledge. 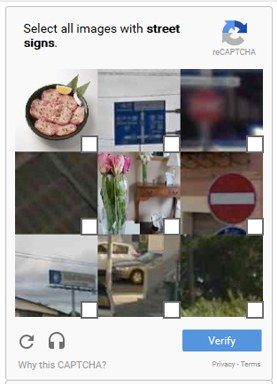 Fast-forward 6 years and CAPTCHA is being used to not only digitize text but annotate images and build machine learning datasets. This in turn, helps preserve books, improve maps and solve tricky AI problems.

It’s a well known fact that search engines don’t understand images like humans do, that’s why alt attributes are needed to allow search engines to add context to pages within your site. As part of machine learning experiments, CAPTCHA will often present you with a grid of different images and ask that you identify ‘the shop fronts’. Or select specific parts of the grid that make up the primary object within an image, such as street signs. All of which are helping machines develop in a way that will better serve its users.

As scammers got more sophisticated, CAPTCHAs started to get more difficult to solve. So the CAPTCHA team developed a new, more secure and dramatically simplified reCAPTCHA experience. In order to make the life of the user that little bit easier, reCAPTCHA was introduced last year, which offered a one-click verification process.

Google have taken it one step further and have announced plans to make CAPTCHA invisible. So ensure you safeguard your site or app with CAPTCHA by signing up today.