Five of our Favourite Spooky Marketing Campaigns for Halloween

Happy Halloween! We’ve changed the logo on our website – did you notice? 🎃Whilst that’s pretty much as far as we’ll go on the spookiest day of the year, for some companies, Halloween is a huge date in the marketing calendar.

The 31st of October might be a bigger celebration in the U.S but we still know how to do things on the other side of the Atlantic. In the UK alone, 2017’s Halloween racked up around £400 million of spending*. For today’s spooktacular blog post, we’ve rounded up five of our favourite marketing campaigns from over the years, all based around the witchy holiday. 🕸

Way back when the iPhone 4S was the new kid on the block, the world was treated to this creepy af app. Take This Lollipop was created by Jason Zada for the Halloween period of 2011 – it was centred around a short film using Facebook Connect to get your details. It wasn’t strictly a marketing campaign but it essentially promoted the idea that we share far too much personal information online. And if you didn’t find it spooky back then, you can’t deny that it’s an eerie prediction of the data-related controversies of Facebook today.

So, TV adverts might not always be the most creative – after all, we all know what they do. But LG really upped their game for Halloween in 2012. The ‘So Real It’s Scary’ campaign involved fitting one of LG’s new IPS screens to the floor of a lift in an office building. Then, the screen would show ’tiles’ falling away, frightening whoever was unfortunate enough to witness it. The campaign was clever, original and it certainly got people talking about LG! Job well done, if you ask us. Not as exciting for those whose reactions were caught on camera… 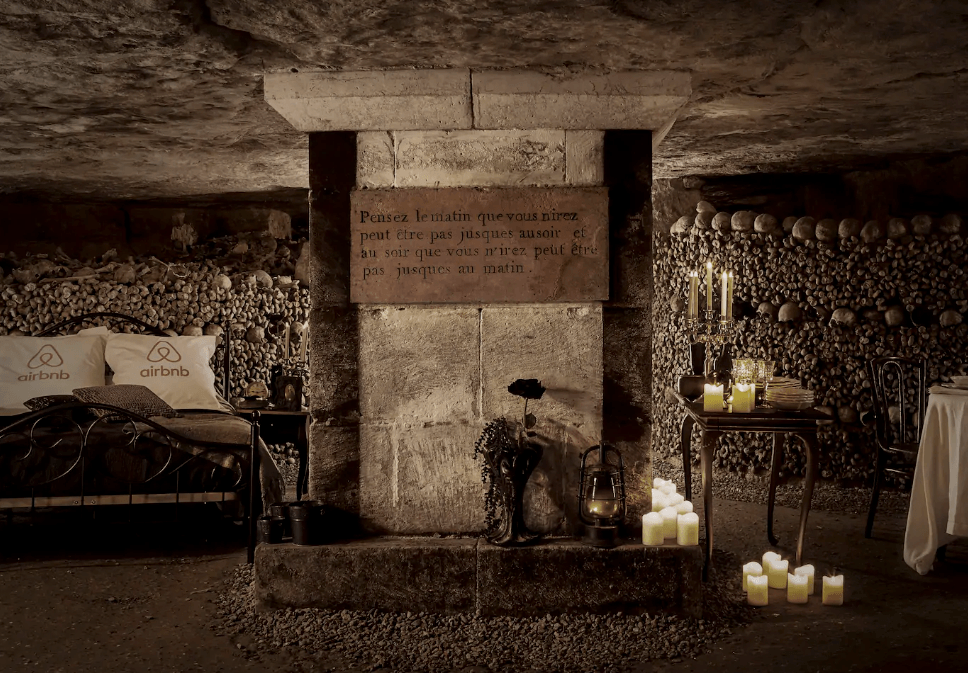 The website that revolutionised holiday rentals also brought us a pretty creepy Halloween campaign in 2015. Basically, Airbnb launched a competition in October that year, offering two guests the chance to stay the night in the famous Paris catacombs – where 6 million bodies are buried. The prize even included dinner and a private concert! Part of the listing read as such: “Enjoy dawn with the dead, as you become the only living person to ever wake up in the Paris Catacombs.” Spooky, much?!

One of the country’s most popular fashion brands collaborated with last year’s Netflix obsession to form an irresistible Halloween campaign. Topshop and Stranger Things joined forces to offer shoppers unique merchandise at selected stores and online… along with an immersive experience at the UK’s flagship store in London’s Oxford Circus. The products sold out in no time at all! Safe to say, the campaign was a great success for both brands involved and shows just how effective pop culture collaborations can be.

Our favourite campaign for Halloween 2018 has to be Burger King’s new burger… the Nightmare King. It’s a step-up from previous years’ efforts, where the Halloween Whopper was trending on social media under the hashtag #greenpoop. In 2018, the fast food outlet has taken things to the next level by launching their Nightmare King burger. This creepy advert shows that Burger King has partnered with a sleep clinic to prove that the green bun can induce nightmares. That’s some intense burger!

So, we wish you a Happy Halloween… and while you’re here, be sure to check out some of our other spooky blog posts – 1900s predictions of future technology and weird events that have happened on Friday 13th. 👻

Sources
*Retail expenditure on Halloween products in the UK from 2013 to 2018  (statista.com)
*Why Halloween is now crucial to some UK brands (marketingweek.com)